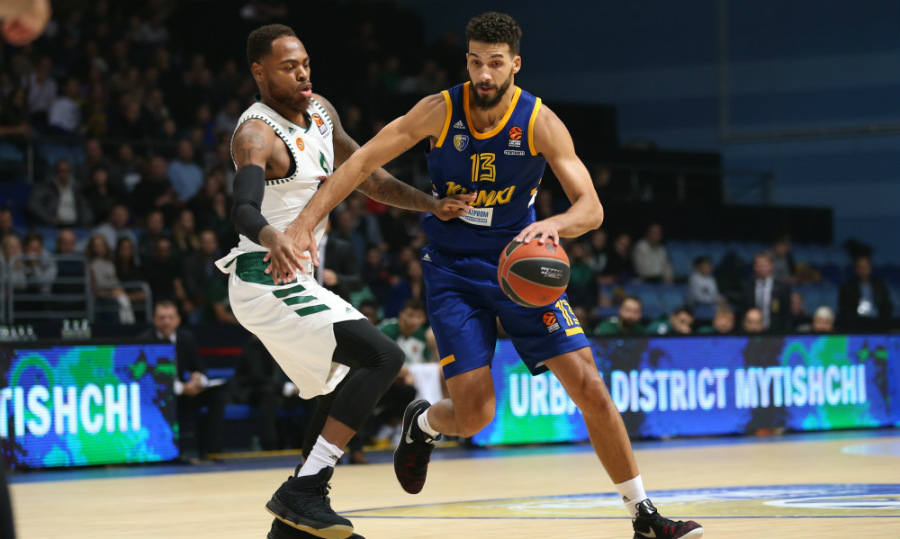 On Tuesday, October 29, 2019 BC Khimki will face Panathinaikos OPAP Athens, Greece in a EuroLeague round 5 game. The game will be played at Arena Mytishchi. Tip-off at 20:00 msk.

Khimki and PAO are tied at 4-4 in their head-to-head series with the home team winning the last five clashes. Panathinaikos forward DeShaun Thomas scored a season-high 25 points against Khimki to lead the Greens to a 94-85 victory in Round 23 last season.

Tyrese Rice played with Khimki for two seasons, from 2014 to 2016. He was the 2015 EuroCup MVP and led Khimki to that season's EuroCup crown. In 2015/2016, he averaged a career-high 12.4 points per game wearing Khimki uniform. He was a teammate of current Khimki players Alexey Shved, Egor Vialtsev and Sergey Monia.

Stefan Jovic tied his career-high with 8 rebounds while playing for Crvena Zvezda mts Belgrade against Panathinaikos in January 2016.

The last time these two teams played, DeShaun Thomas posted his career-high in offensive rebounds with 5 in February 2019.

“Panathinaikos is a team that knows how to win games. They have a clear leader in Calathes who tactically always takes smart decisions. Also, he can score three-pointers in the clutch moments but he is not a shooting guard. PAO has huge experience and several times has won the EuroLeague, that I often explain to my players: to play basketball and to win games is not the same. In this context we are gradually approaching the top clubs; everything is so far so good but, for sure, we have a lot of work to do. Against Panathinaikos everything will depend on how we will be able to control the game”.

“Panathinaikos made some changes; they have a new coach and some new players, but their style has remained pretty much the same. They play fast and aggressive basketball. At the same time, Panathinaikos at home and on the road is not the same team, as their main support is their home arena. The season has just started and all the teams are trying to play together, players find each other, so at the moment I don’t think there is any team in the League in its best shape. Khimki also didn’t have any practice at full roster, so I hope this day will come as soon as possible”.

khimkipanathinaikoseuroleaguekurtinaitistimma
Share on FacebookShare on ВконтактеShare on TwitterShare on ОК