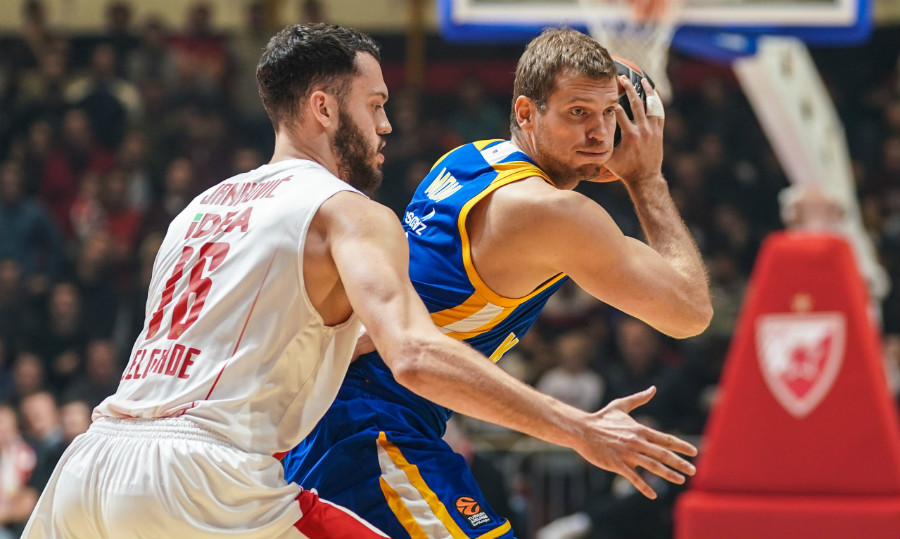 On Thursday, October 31, 2019 Khimki Moscow Region will face Crvena Zvezda mts Belgrade, Serbia in a EuroLeague round 6 game. The game will be played at Aleksandar Nikolic Hall. Tip-off at 21:00 msk.

In season 2008/2008 Jonas Jerebko and James Gist played together for Angelico Biella, Italy.

“We will play in Serbia in a hot atmosphere. We respect our opponents and Serbian traditions, because their fans always give a huge boost to the team. They changed the coach recently and probably have some problems, but Crvena Zvezda always fights till the end, regardless the name of their opponent. With the return of Kuzmic they started to play more confident. So, we expect a tough game but we are ready for it. Everything will depend on the energy because in a double week it is unknown in what shape the teams will be after first game. In six days, we have to play three games, including our local game against UNICS Kazan on Sunday. The first step we did yesterday against Panathinaikos, now our mission is Belgrade”.

“Crvena Zvezda has good players like Gist, Jenkins and Lorenzo Brown. These three make the result for the team. If we are able to play with the same effort and energy like it was yesterday against Panathinaikos, we will have good chances to win on the road”.

khimkicrvenazvezdaeuroleaguekurtinaitiskarasev
Share on FacebookShare on ВконтактеShare on TwitterShare on ОК

Shved powers Khimki to slump-busting win over RealSan Emeterio leads Valencia to road winZenit holds off Khimki on the roadKhimki's Gill, out indefinitelyKhimki outplay CSKA at crowded MytishchiGame of the Week: Khimki vs CSKAEfes sinks Khimki with 16 threesASVEL survives big Khimki rallyThere are no undefeated teams in league no more. 13th week in reviewKhimki vs Lokomotiv-Kuban HighlightsLoko hand Khimki their first defeat this seasonJovic leads Khimki past Zalgiris...
2019
October