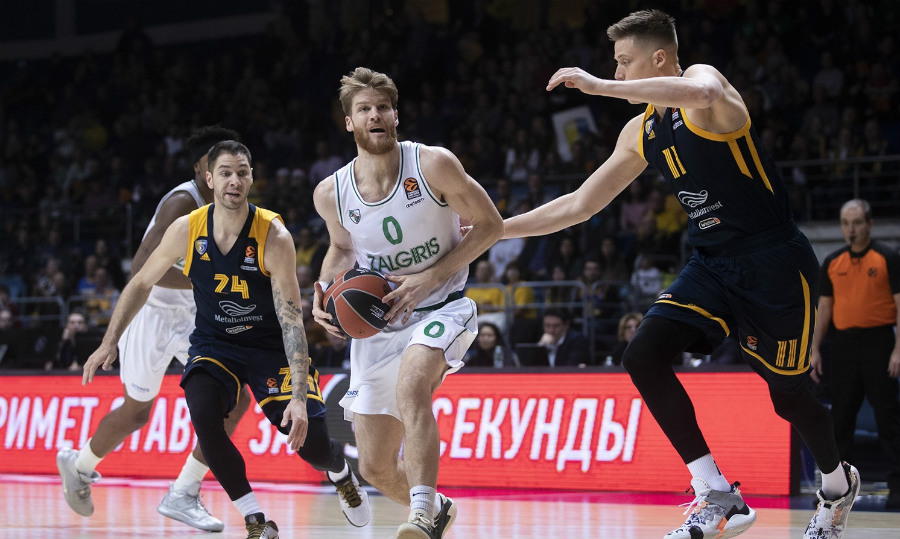 On Friday, October 9, 2020 Khimki Moscow Region will face Zalgiris Kaunas, Lithuania in a EuroLeague round 2 game. The game will be played at Arena Mytishchi, Russia. Tip-off at 20:00 msk.

Zalgiris forward Paulius Jankunas has played his entire professional career with Zalgiris except for the 2009/2010 campaign, which he spent with Khimki. He was a teammate of Vyacheslav Zaytsev that season.

Zalgiris big man Joffrey Lauvergne played at Khimki for the start of the 2014/2015 season, before leaving in February 2015. Khimki went on to win the 7DAYS EuroCup title that season. Lauvergne was a teammate of current Khimki players Egor Vyaltsev and Sergey Monia that season.

Janis Timma and Patricio Garino were teammates and made their EuroLeague debuts with Baskonia Vitoria-Gasteiz during the 2017/2018 season.

“For us nothing changes and our plans are the same. We will play to win, as we do not give ourselves any indulgences. Those players who spent more time on the bench last season will play more tomorrow, they now have a good chance to prove themselves in the EuroLeague. Every game is 50-50, but we are playing at home and we will see how to beat Zalgiris. I follow the Lithuanian League and know how Zalgiris plays. They have a new and promising young coach Martin Schiller, who has American experience. He was one of the leading coaches in the G-League, and the style of his new team, Zalgiris, changed. If with Jasikevicius Zalgiris put an emphasis on defense and set offense, now they are playing fast and with freedom, to some extent, in the US-style basketball. They prefer fast offense with the fifth or tenth seconds on attacks; they don’t have a "long" offense. In this style, they are especially dangerous, because, as the game with Olympiacos showed, even losing, they did not break down, showed character and were able to regroup. At the moment, Zalgiris is a dark horse, and at the beginning of the season, it is difficult to say what to expect from them. We have to look at ourselves and focus on our game because we have to solve our problems. If Zalgiris wants to play fast basketball, it will be in our favor, because we love this style. Let’s see what happens tomorrow”.

“I know Martin [Schiller] from my Jazz days. I know he is a great coach but basketball is basketball. I'm just gonna be ready for tomorrow’s game and that’s it. I remember my playing with Zalgiris in Kaunas last year. It was fun; their fans know basketball, they are great and very knowledgeable about basketball. So playing in a basketball country like Lithuania was an awesome experience. We try to get everybody healthy, perform on the court, and do our job. All the rest you just have to care of yourself, take care of others, wear a facemask, wash your hands, and just stay safe out there”.

khimkizalgiriseuroleaguejerebkokurtinaitis
Share on FacebookShare on ВконтактеShare on TwitterShare on ОК